On the 14th of September 2016, Year 6, travelled excitedly to Alton Castle. It took about two hours to get there on the coach. We were going to Alton Castle on a retreat in preparation for our Confirmation and I was SO exited! We left school at 9:00 and got there at 11:00. When we got on the coach, we saw all of the parents waving at us, some were almost crying! We started waving at them and soon we were off!

Sometime later, I spotted a tall, stony castle ahead of us, I knew it was Alton Castle. Everyone was cheering and praising God because we were finally here! We only needed to go through a small village and we had made it! I was so relieved that we were finally there!

The coach started to slow down but I saw some people standing outside of the coach, it looked liked they were waiting for us. Then the coach driver started unpacking our bags from the coach. When we had all got off the coach and got our bags, one of the people that were waiting for us said, "Hi guys, my name is Jamie and you must be from St Thomas More's!" The other school that joined us were from Stour port called St Wulston's. I also found out what room I was in: I was with Ellie, Rosie, Roseanna, Megan, Evie, Nieve and Isabella. I was delighted to be sharing with my friends.

The next day, we found out what activities we were doing. We got split into different groups, my group did survival first. In survival, we split into small groups and built shelters. I had Sophie and some girls from St Wulston's in my group. While I was making the roof to the shelters, I started talking to a girl from St Wulston's, she told me that she was called Cyrin and then I introduced myself to her and told her my name and we were friends! After the shelters, we went to go and make a fire! We used flint and steel to make the fire and then we toasted marshmallows and hot chocolate on it! I really enjoyed this activity with my new friends.

The next day, Miss Clarke woke us up at 7:00! In the morning, we needed to start packing our bags and then we did our last activity! It was trekking! So my group set off across the countryside, it was quite a long walk and I saw horses and cows along the way! Everyone was very thirsty but luckily some of the team brought drinks! Then I realised that there wasn't enough drink bottles for everyone so we had to share!

When we stopped, I looked at the hills, the fields-bright and soft-had some beautiful animals grazing on them. After that small pit stop, we started moving again. Soon, we came to a small patch of clay. The team said to go and put some clay on our faces, so we did! I put it on my two rosy cheeks, but some of the boys just splatted it on their faces! A few minutes later, we came across a big ditch, so we decided to have a race. We did the race in threes, I came second in my race.

After that, I spotted some bars. The team said, "Through those bars is Alton Towers, go ahead and put your hands through them," so we did! After that it was time to head back to the castle. After we reached the castle we went to Mass to say thanks to God for the wonderful time we had in Alton Castle. This was a lovely time for reflection and to thank God for this fantastic opportunity. We were joined by Sister Susan, Mrs McHugh, Mrs Doherty and Miss Ryan. It was lovely to see them all.

Now it was time to leave Alton Castle, I was very upset but happy to see my family again! I started packing my things and then went onto the coach. Goodbye Alton Castle, see you next time! 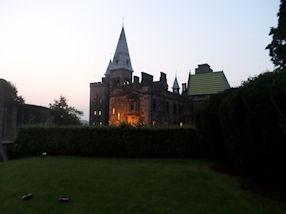 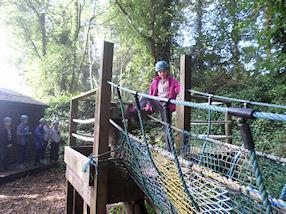 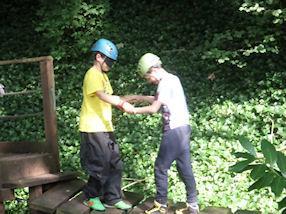 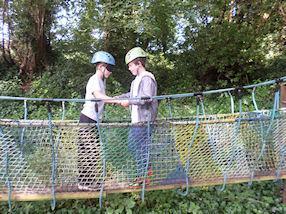 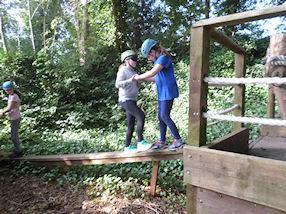 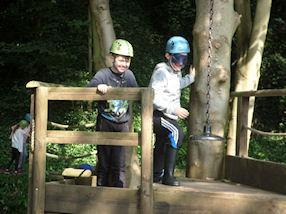 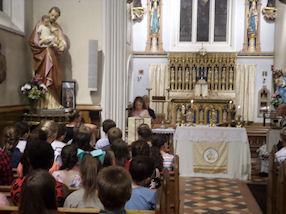 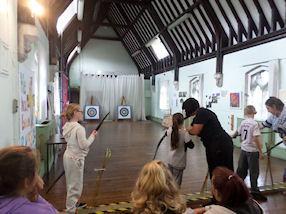