On Thursday 24th May Year 6 had the privilege of visiting St Chad’s Cathedral. We visited the Cathedral because we are preparing for our Confirmation.

It was built from 1839-1841 through the inspiration of Thomas Walsh; Pugin designed most of the Cathedral. When we arrived we were sent down into the crypt to be sorted into groups; our tour guide was Mrs Peel. Whilst in the crypt, we learnt about Pugin and his designing of candlesticks and tabernacles; there were some examples at the front where there is a small altar.

We also found out that some important people are buried down there (Bishops/Archbishops etc.) Interestingly, we learnt about Pugin’s family, he married three times and had lots of children; most of them died just after birth and some a little older. The ones that did live carried on to do design and make things just like their father and generations went on. In the next room we saw lots of statues of Jesus, Saint Anne, and lots more and we learnt lots of interesting information.

After this, we travelled outside and discovered some more facts; firstly when St Chad’s was built it had one turret instead of two because they didn't have enough money. We also found out that people thought the walls were made out of black stone because of all the factories and the pollution, when they were knocked down people realised that it was red brick. They were going to build the cathedral in stone but again they didn't have enough money or time.

We went back inside and into St Edward’s Chapel –here we found out St Chad’s life story. He was buried next to a Church and his grave was a shrine for hundreds of years. When the Church was demolished his bones were secretly dug up and passed on from family to family in secret. Now his bones lie perfectly on the altar, above the tabernacle.

We were privileged as we were allowed up on to the altar, and saw some old, wooden chairs which flip up when the priests are standing up singing but because the priests were up from four in the morning onwards, there was a small ledge so they could lean on it and no one could see. Also at the front, where the tabernacle is, there is some small decorative lions, when you are in the congregation you can’t see them but Augustus Pugin wanted to give as much glory to God as possible.

We had the honour of taking part in daily Mass while we were there and two children were asked to altar serve. During this Mass, I felt closer to God and knew that he would help me as I prepare for my Confirmation.

In conclusion, I enjoyed my visit to St Chad’s Cathedral. My favourite parts of the day were Mass and hearing about where the bomb came through the roof during WW2 but luckily the water from a burst radiator put it out. I think the trip has brought me a step closer to being ready to receive my Confirmation in July. 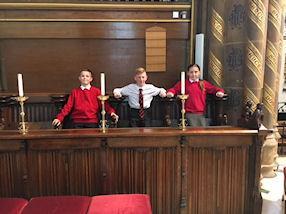 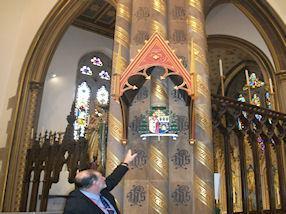 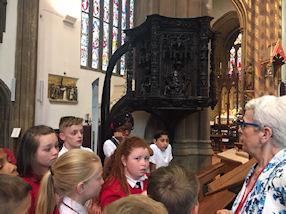 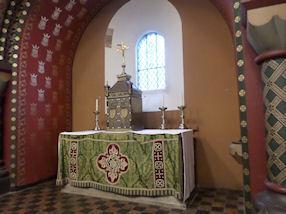