On Thursday 10th March 2016, Year 6 went to visit St Chad's Cathedral for spiritual reasons. The reason for this visit was to prepare ourselves for the Sacrament of Confirmation so that we will know more about the Church we belong to.

We had a tour of the Cathedral, learnt some history and attended Mass. This visit definitely increased my faith and helped to prepare me further for my Confirmation in July.

We left school at 9 o'clock and arrived at the Basilica at around 10 o'clock. Shortly after we arrived, all of Year 6 went into the Cathedral and walked to the crypt, this is under the cathedral where people were buried. The person who welcomed us was a lady called Mrs Peel, she told us what we would be doing.

The Cathedral was built between 1839-1841 and it was designed by Augustus Pugin. A lot of the things in the Cathedral were brought back from the continent: Holland, France and Germany etc. A Bishop of Birmingham had the great idea of building the beautiful Cathedral because before the Cathedral was built there was only a small church and the Catholic community was getting bigger rapidly. The designer, Pugin, died in 1852 at the age of 40; Pugin had designed many other beautiful places like Oscott College and Alton Castle.

During the Tudor Age, Henry Tudor wanted to destroy St Chad's bones but a monk stole them and brought them to a trustful family. The family kept passing the bones onto different families to try and keep them safe. Eventually, the bones were passed to a dying man who gave them to a priest who donated them to St Chad's Cathedral.

After starting in the Crypt, Mrs Peel's group (the group I was in) went to the main Cathedral hall. When we went into the great hall, we were awe-struck and under it's spell of beauty. It was beautiful with many miraculous statues. When we went through the doors, we were told that the roof was designed by Pugin with his favourite colours: red, gold and greeny-blue. There were also pillars that led your eyes to the amazing roof and to Heaven.

After being told about the roof, we walked through the middle aisle and to the high altar. When we reached the altar, we heard that many years ago Mass was said in Latin and the priest never faced the congregation. On the Altar we saw the Cathedra (the seat where only the Archbishop sits). We also saw benches where priests sit and their chairs have like small rests which they can lean back on.

When the tour had finished, we went into Mass with some other parishioners. It was a very silent and reverent scene; everyone was ready to welcome God into their hearts. The priest Father Lennon came in and welcomed us and told us about the Mass. The Mass was very calm and reverent and I enjoyed it immensely. After the Mass Father Lennon had a chat with us before we went and had lunch. After lunch we had time to go and buy some small gifts for our family before going back to school.

This was an enjoyable trip and it prepared me well for the Sacrament of Confirmation. and I learnt lots of fascinating information about St Chad and his life. 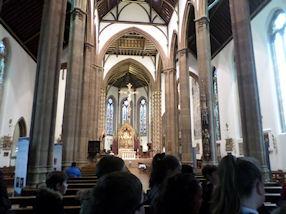 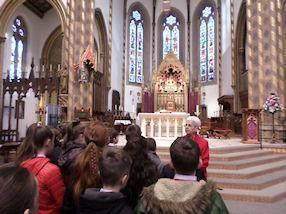 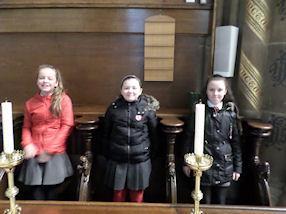 Preaching from the pulpit. 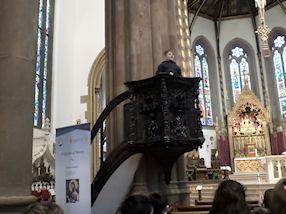 Our altar servers with Fr Lennon. 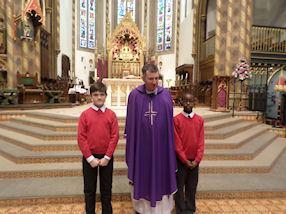 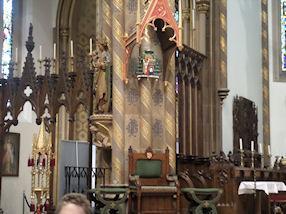 Walking through the Door of Mercy. 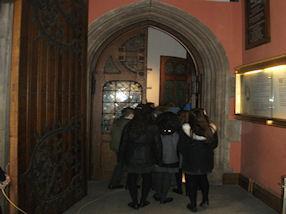 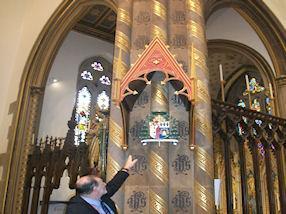 Looking at how Pugin decorated the Cathedral 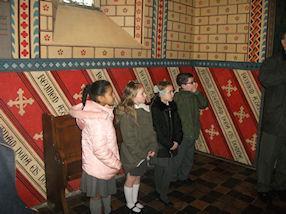 The Door of Mercy at the Cathedral.. 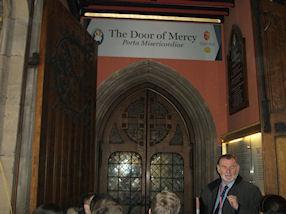